Monochromatic light of a certain wavelength falls on a narrow slit. On a screen a certain distance away, the distance between the second minimum and the central maximum is 2cm. What would happen to the spacing between the two if the wavelength of the radiation were increased?

D. It would increase.

The following units are often used when quoting wavelengths:

The full spectrum is broken up into many regions, which in descending order of wavelength are 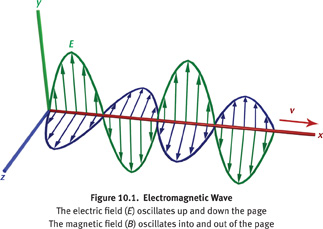 When light travels through a single homogeneous medium, it travels in a straight line

where θ 1 is the incident angle and θ 2 is the reflected angle, both measured from the normal 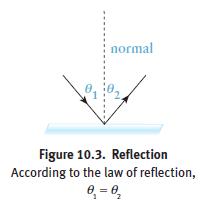 light actually converges at the position of the image

light only appears to be coming from the position of the image but does not actually converge there.

a point on the optical axis located at a distance equal to the radius of curvature from the vertex of the mirror;

in other words, where the center of the mirrored sphere would be, were it a complete sphere.

Focal length (for all spherical mirrors)

The focal length (f) is the distance between the focal point (F) and the mirror (for all spherical mirrors,

In general, there are three important rays to draw..

Object is in front of the mirror (R-side)

Object is behind mirror (V-side)

Image is in front of mirror (R-side)

Image is behind mirror (V-side) 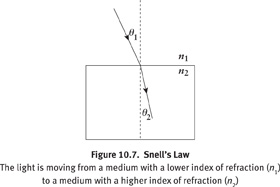 index of refraction of the medium.

all the light incident on a boundary is reflected back into the original material, results for any angle of incidence greater than the critical angle, θ c 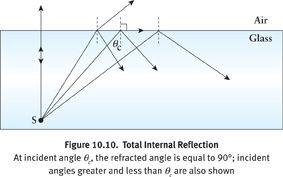 Because light can be coming from either side of a lens, a lens has two focal points (one on each side of the lens) and the focal length can be measured in either direction from its center 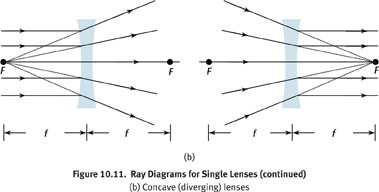 (apply as those from spherical mirrors)

For lenses where the thickness cannot be neglected, the focal length is related to the curvature of the lens surfaces and the index of refraction of the lens by:

Object on side of lens light is coming from (V side)

Object on side of lens is going to (R side)

Image on side of lens light is going to (R side)

Image on side of lens light is coming from (V side)

diopters, where f (the focal length) is in meters and is given by this equation:

P has the same sign as f and is, therefore, positive for a converging lens and negative for a diverging lens.

series of lenses with negligible distances between them. These systems behave as a single lens with equivalent focal length given by 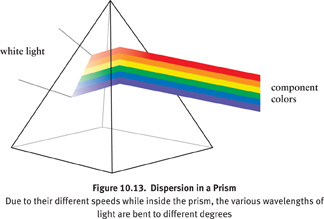 As the slit is narrowed, the light spreads out more. This spreading out of light as it passes through a narrow opening=diffraction 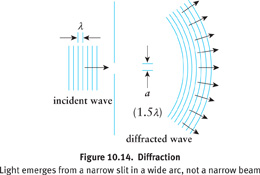 where a is the width of the slit, λ is the wavelength of the incident wave, and θ is the angle made by the line drawn from the center of the lens to the dark fringe and the line perpendicular to the screen. 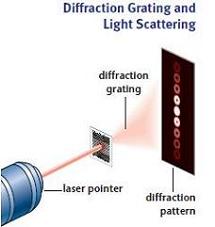 random orientation of its electric field vectors; sunlight and light emitted from a light bulb are prime examples 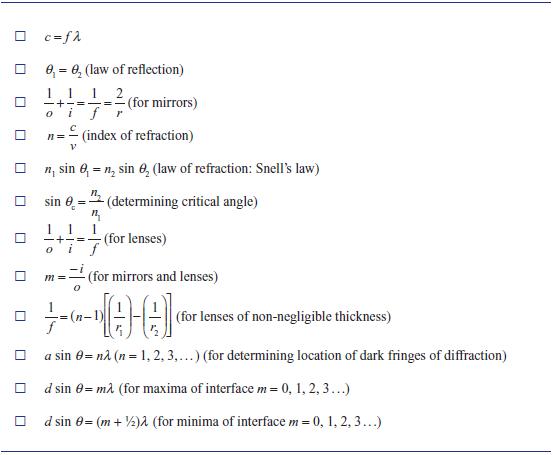 work function of the metal

We can calculate the maximum kinetic energy of the ejected electron with the formula: 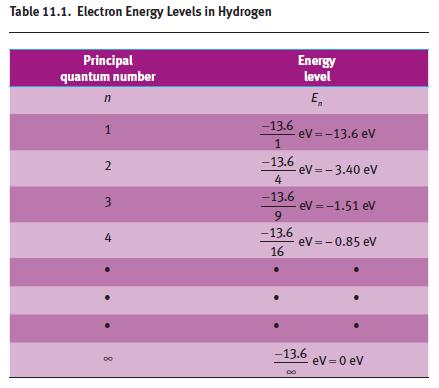 change in energy of an electron due to absorption or emission of a photon.

determine the change in energy of an electron due to absorption or emission of a photon.

The absolute value sign around Δ E represents the fact that negative frequencies do not exist, so the apparent sign of Δ Eis irrelevant once you know

1. Energy levels of the electron are stable and discrete. They correspond to specific orbits.

2. An electron emits or absorbs radiation only when making a transition from one energy level to another (from one allowed orbit to another).

3. To jump from a lower energy (inner orbit) to a higher energy (outer orbit), an electron must absorb a photon of precisely the right frequency such that the photon's energy (hf) equals the energy difference between the two orbits.

4. When jumping from a higher energy (outer orbit) to a lower energy (inner orbit), an electron emits a photon of a frequency such that the photon's energy (hf) is exactly the energy difference between the two orbits.

(where  λ is known as the decay constant.)

Relation to half life: