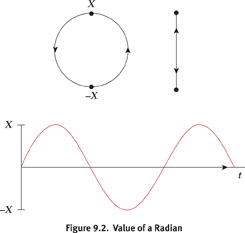 X is the amplitude (maximum displacement from equilibrium), ω is the angular frequency (ω = 2π f = π /T, where T is the period, ,1/f the time to complete one cycle), and t is time.

[assume all the potential energy of the spring will be converted to kinetic energy as it oscillates.]

Angular Frequency of a Pendulum (of length L)

Neglect air resistance and friction and mechanism supporting pendulum above:

where Y is the amplitude (maximum displacement), k is the wavenumber (don't confuse this k, wavenumber, with the spring constant k in Hooke's law!), ω is the angular frequency, and t is the time.

speed of the wave (v)

Points in the wave that remain at rest (i.e., points where amplitude is constantly zero) are known as nodes, and points that are midway between the nodes are known as antinodes.

Antinodes are points that fluctuate with maximum amplitude.

The length of the medium dictates the wavelengths of traveling wave that are necessary for establishing the standing wave. Furthermore, the nature of the boundary dictates the appearance of a node or antinode at the boundary itself.

frequency or frequencies at which an object will vibrate when disturbed

If the oscillating system were frictionless the periodically varying force would continually add energy to the system, and the amplitude would increase indefinitely.

because no system is completely frictionless, there is always some dampening, which results in a finite amplitude of oscillation.

transmitted by the oscillation of particles along the direction of motion of the sound wave. Therefore, sound waves are longitudinal.

Intensity of a Sound (I)

where (If/Ii) is the ratio of the final intensity to the initial intensity.

our perception of frequency

What we hear if the two sound waves have nearly equal frequencies in the audible range, the resultant wave will have periodically increasing and decreasing amplitude,

Brainscape is a web and mobile study platform that helps you learn things faster. Our mission is to create a smarter world by simplifying and accelerating the learning process. © 2021 Bold Learning Solutions. Terms and Conditions