based on a simple observation:

no net heat flows between objects in thermal equilibrium

amount of length change is proportional to the original length of the solid and the increase in temperature:

formula for volumetric thermal expansion is applicable to both liquids and solids:

Δ V is the change in volume, V is original volume, ß=3(alpha)=coefficient of volume expansion, T=temperature

The internal energy of a system can be increased by adding heat, doing work on the system, or some combination of both processes.

Three means by which heat can transfer energy

direct transfer of energy from molecule to molecule through molecular collisions

transfer of energy by electromagnetic waves

the amount of heat energy required to raise 1 kg of a substance by 1° C or 1 K.

phase change from liquid to solid (freezing) or solid to liquid (melting or fusion) occurs at the melting point.

Setup: Approximately how much heat is req to completely melt a 1 kg silver chain whose initial temp is 20 deg C?

Work in a Gas System

What work is done when decrease in pressure from P1 to P2 at a constant volume?

no change in volume, the work done in this process is zero.

What work is done when system expands from V1 to V2 at a constant pressure?

Because the gas has expanded, the work was done by the gas and is positive.

What work is done when neither pressure nor volume is held constant?

graphical analysis (fig C): The total area under the graph (Regions I and II) gives the work done

What work is done in a closed cycle in which, after certain interchanges of work and heat, the system returns to its initial state?

measure of the spontaneous dispersal of energy at a specific temperature

where L is the latent heat (either heat of fusion or heat of vaporization), m is mass, and T is the constant temperature of the system and environment in Kelvin. 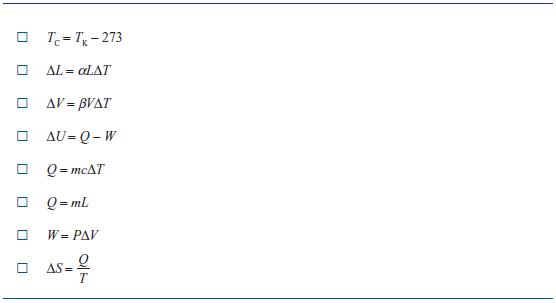