scalar quantity and therefore has no direction

the study of fluids at rest and the forces and pressures associated with standing fluids. 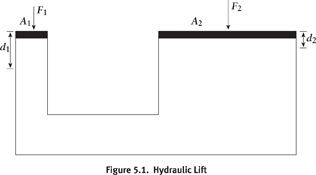 *conservation of energy (assuming the absence of frictional forces)

Work due to pressure and volume (fluids)

A body wholly or partially immersed in a fluid will be buoyed up by a force equal to the weight of the fluid that it displaces.

the attractive force that a molecule of liquid feels toward other molecules of the same liquid.

resistance of a fluid to flow

no viscosity and are described as inviscid.

The velocity vector of a fluid particle will always be tangential to the streamline at any point.

Streamlines never cross each other.

tells us that fluids will flow more quickly through narrow passages and more slowly through wider ones.

the ratio of stress over strain

Yield strength is the point of shape change beyond which a material will not return to its original dimensions once the applied force is removed (think of a crumpled piece of paper).

ultimate strength will be reached if more stress applied, beyond which point the object will rupture (think of a broken rubber band). 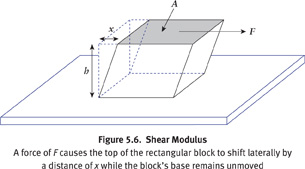 shear: shapre change due to force applied parallel to an object's surface rather than perpandicular to it

difference between surface pressure and absolute pressure In liquids, gauge pressure is caused by the weight of the liquid above the point of measurement

is the sum of all pressures at a certain point within a fluid; it is equal to the pressure at the surface of the fluid (usually atmospheric pressure) plus the pressure due to the fluid itself 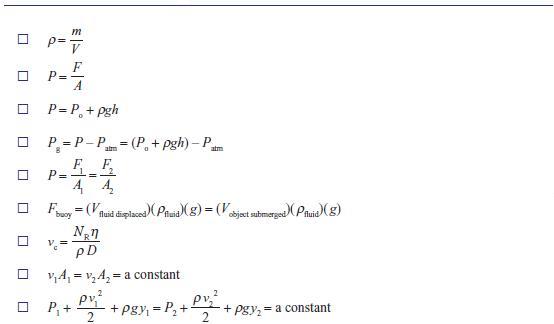