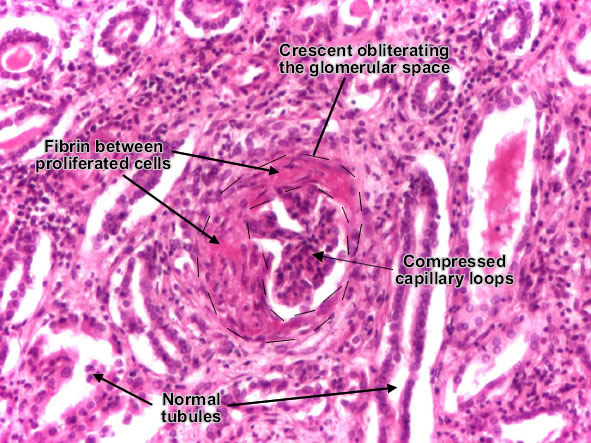 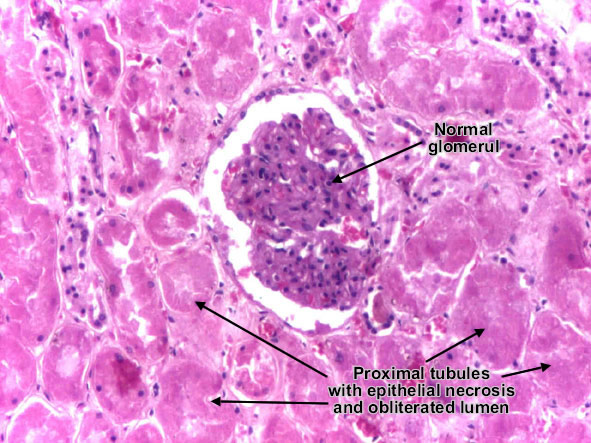 The brush border in the proximal tubule is not nearly so distinct as it is in the intestine, but it's nonetheless present, and in favorable sections it can be made out

[MEMBRANOUS NEPHROPATHY]. Membranous nephropathy is characterized by diffuse thickening of the glomerular capillary basement membrane by subepithelial immune complex deposition. This results in damage and increased permeability of the basement membrane to plasma proteins and hence nephrotic range proteinuria. The disease may be primary or secondary to a variety of causes including drug toxicity, certain carcinomas, certain infections, and SLE. A routine H&E stain usually shows identifiable thickening as seen in this case. (Contributed by Dr. William J. Hunter, Professor of Pathology, Creighton University Medical Center, USA).

Light micrograph of an essentially normal glomerulus in minimal change disease. There are only 1 or 2 cells per capillary tuft, the capillary lumens are open, the thickness of the glomerular capillary walls is normal, and there is neither expansion nor hypercellularity in the mesangial areas in the central or stalk regions of the tuft (arrows).

ICs are trapped between the endothelial cell and the GBM

ICs pass through the GBM but are trapped beneath the podocytes

ICS deposited within the GBM

What are subendothelial deposits associted with?

DPGN (diffuse proliferative glomerulonephritis) which is also associated with nitramembranous

What are subepithelial deposits associated with?

[MINIMAL CHANGE DISEASE]. A silver methenamine stain is used to highlight glomerular capillary and Bowman’s capsule basement membranes and any thickening thereof. This photomicrograph shows a glomerulus with normal thickness of capillary basement membranes (arrow). Although most cases of minimal change disease are seen in children a small number of patients are adults in whom the recovery is not as rapid as in children and some adults are also afflicted with Hodgkin lymphoma (Contributed by Dr. William J. Hunter, Professor of Pathology, Creighton University Medical Center, U.S.A). Type I - subendothelial Is with granular IF Urine sediment with a fatty cast 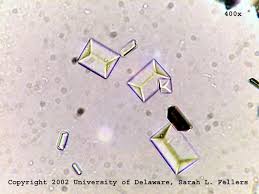 Thyroidization of the kidney as a result of chronic pyelonephritis

Glomeruli with Kimmelstiel-Wilson nodules. The smallest nodules can be more cellular and the greatest nodules tend to be acellular in the centre and surrounded by more cellular zones. Capillaries are seen around these nodules, sometimes adopting an aspect in garland (like in the three nodules indicated with arrows); in some cases we see microaneurisms around nodules. Notice the variability of size of the nodules (H&E, X.400). This is nodular glomerulosclerosis (the Kimmelstiel-Wilson lesion) of diabetes mellitus. Nodules of pink hyaline material form in regions of glomerular capillary loops in the glomerulus. This is due to a marked increase in mesangial matrix from damage as a result of non-enzymatic glycosylation of proteins. This is one form of chronic kidney disease (CKD) with loss of renal function over time.